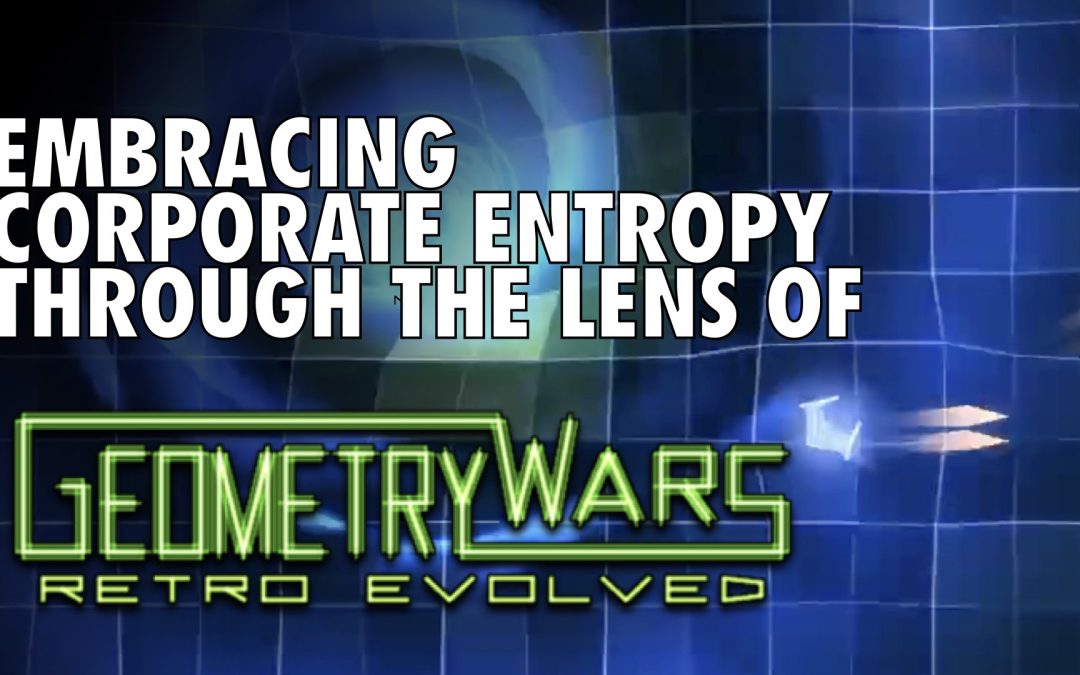 BRIEF HISTORY LESSON
If you had purchased Project Gotham Racing 2 (PGR2) for the original Xbox, you probably were pleasantly surprised to find that there was another game hiding in your garage. The reason for this was that Bizarre Creations, the developers of PGR2, had built their own toolset for testing out the Xbox controller. This ‘tool’ took the form of a 2D-top-down mini-game called “Geometry Wars” (similar to arcade games like Tempest and Asteroids) which the devs wound up leaving in the game as an unlockable arcade cabinet.

This mini-game was so well received that the developers expanded upon this original concept and, 15 months later, ported a full version of the game “Geometry Wars: Retro Evolved” to the Xbox Live Arcade.

At the time of Geometry Wars: Retro Evolved’s release, I’d been managing a trio of website properties at a large corporate office. The executives at the top of this organization believed that adversarial relationships between departments created ‘healthy competition’ and ‘fostered team spirit’. The reality is that all it ‘fostered’ was an ongoing tempest of accusations and rampant alcoholism amongst the rank-and-file employees. While some turned to extra-marital affairs or prescription drugs, my escape was in found in an hour-long dose of Geometry Wars: Retro Evolved which would always bring me back to a healthy mental equilibrium.

FINDING PEACE WITHIN THE PIXELS
So, what was the deal with that game and how did it help bring me mindfulness in a time of great torpor? Well, it turns out that the same mechanics that can calibrate and adjust controllers for an Xbox can also be used to control the bats in one’s personal belfry. The unyielding onslaught of enemies and obstacles in Geometry Wars provided a straight up metaphor for a standard day at the office. The game allowed me to break down, make sense of, and almost find comfort in all the insanity. No matter what you do, no matter how adept you are at keeping the wolves at bay, none of it will prevent you from the slow, gradual decline into disorder.

Below is a breakdown of the gameplay mechanics and their similarities to my time in corporate life along with a video that shows Geometry Wars in action.

UNDERSTANDING & EMBRACING CORPORATE ENTROPY THROUGH
MY TIME WITH GEOMETRY WARS: RETRO EVOLVED
As the game begins, you are presented with a clean rectangular slate which could be viewed as a metaphor of your mental state upon arriving at the office to begin your day. For the first few moments, you are protected by a glowing shield that quickly disappears as meet your first co-worker:

If the coworker is a team member you manage, you can assign them projects, tasks, that will take them off your slate. If they are just a fellow employee, you can simply go back to work.

Up next are email and messaging which I’ve collected together in a group called “Communications”.

Communications refer to pressing emails, voicemails, and other memos/messages that need to be addressed before moving on to the tasks and projects at hand. If you spend too much time focused on communications, you’ll be doing a disservice to yourself when the real work arrives. At the start of a day, it’s best to handle the major emails and move on.

At the start of the day, everything appears to make sense and, as the coffee begins to kick in, you might even catch yourself thinking that you might be able to do something that makes a real change around here. That’s foolish talk as you forget everyone else’s coffee is also beginning to kick in including the worst folks in any (read: “every”) workplace.

Do you have anyone in your office that drives a Porsche, Audi, or BMW to work? Did someone tell you about their Harvard MBA without any kind of non sequitur or previous context? Is someone staring at you right now or making a video of you reading this post with their cellphone? These are all common traits of office sycophants and they are seriously fucking everywhere in corporate offices. Make no mistake, this group of individuals is working 24/7 to bring you down so that they can move themselves up on some imaginary corporate ladder. Luckily, for normal people, these ‘bullies’ are easily dispatched by focusing all attention on them. Their entire spectrum of conversation is limited to very specific talking points (car, college degree, golf tournaments, etc.) and if you press them on anything remotely human outside of those bowling-lane-bumpers, they fold faster than Superman on laundry day.

As meetings and calls begin to manifest themselves, you may eventually find yourself being attached to new projects that you didn’t agree to or that were passed on to your team because of a “priority shift”. When dealing with projects on a 1:1 basis, make sure to address all parts of the project up front as these projects tend to have dangling participles that can spin wildly out of the original brief and cause you major headaches down the road.

The day is just getting started and you’re already neck-deep in shit that no one could have prepared for. Well, if you think it’s time to get down to work, you must be new around here as there’s always a new wrinkle that needs to be ironed out, kid. If you think that you can put projects, people, or messages on the back burner so you can handle them later, let me introduce you to the crisis funnel that is the Procrastination Vortex.

If you are only guarding your front, you’re eventually gonna take one in the ass.
– Ben Franklin

A Procrastination Vortex starts off as a small gravity well of incomplete tasks but eventually grows into a full-fledged, career-destroying black hole. To avoid these, you’ll want to be super-responsive with people, projects, and communications, handing situations right and carving out some quality time to address the issues at… HA HA HAH AHAHAH! Oh man, I tried to make it through that last sentence without bursting out laughing. There’s nothing you can do to avoid these, they are inescapable.

Truth be told, since your responsibilities will most likely continue to grow as the company downsizes, transforms, and cuts budgets, the best thing for you to do at this point is to learn how to leverage your inability to finish work. Soon you’ll be able to wield your mountain of unfinished work as a weapon against sycophants and project managers (which are generally born from these vortices anyway).

Now, say you‘re part of a rudderless project that’s breached it budget or if one of your weapons-grade vortices have explodeth-ed over. In any MBA-addled environment, you can rest assured there will be some deflection of blame/finger-pointing meetings in your future. These ‘summits’ are generally led by project managers who assess all parameters of the process and…aw, who am I kidding? Project Managers are generally instruments of leadership and are on a mission to immolate and make an example of those responsible. for this RIGHT. FREAKING. NOW. those responsible RIGHT. FREAKING. NOW (also be sure to douse the remains with a bucket of water and dump the ashes out over ashes over the fire so that nothing else can burn down.

The good news is that Project Managers, much like the sycophants, follow a very similar and simple trajectory. The best defense is to hold a Friday afternoon offsite, imbibe everyone with copious amounts of alcohol, and then admit to your mistake of, “trusting that [name of sycophant across the room] to manage this project properly”. By Monday, everything should have been forgotten and, if not, you can always threaten to share pics from Friday night on Instagram.

While there are many more shapes to share from Geometry Wars, the last metaphor I’ll share (and the one that’s the most “What the F” inducing) is the department/budget/compliance audit monster. This beast comes at you from all sides and wears two dozen heads. There’s no negotiation, no reasoning, just an acceptance of your eventual jagged, coiled suffocation.

But those who’ve played the corporate game (or Geometry Wars) will tell you that there is hope and that you can defend your contributions to EBITDA or simply avoid this group with a well-timed sabbatical (or smart bomb). Those who think this are FOOLS as audits never die and auditors never use the same offense twice. This model has been revealed in Geometry Wars and even TWO SMART BOMBS have proven ineffective against this juggernaut. The quote below is not for the faint of heart and shows that even when you cut off 24 heads, there are 24 more underneath your feet waiting to drag your department to the chopping block.

EPILOGUE
A wise philosopher once said, “every single day, stress comes in every way” which is why I’ve taken the time to share my experiences on how I’ve managed my mindfulness through gaming. Geometry Wars was just one of the games I’ve used to make sense of the often obtuse and abstract interactions between fellow human beings. The developers at Bizarre Creations may have just been creating something to test Xbox controllers, but I’d love them to know it’s been equally effective as a therapeutic depressurization system for those that toil in the mines of middle management as well.